If celebration is something to be taken as a precursor of things to come, you’d sure have caught the whiff that Jashn-e-Rekhta is coming back this year. In case you don’t, you can glean all the details here.

Of course, Urdu lovers already know what the word is all about, but there are less-known findings and affinities about the word that can strike all readers as unique. So, let’s dive right into it.

The word Diwan boasts scores of meanings, ranging from a royal court; tribunal of justice or revenue; an account-book; a collection of poems in the alphabetical order of the final letters of the various end-rhymes; and finally, a miscellaneous collection from different authors. So, you see how diverse the meanings are, from being an assembly of humans on one side to being a collection of verses on the other, the word has quite an extent to cover.

But do you know what are the word’s building blocks?

Diwan is actually a Persian word, originally pronounced as Dewan. The word is actually made up of the Sanskrit-loaned Dev (deity) and the plural-making component Aan (as in Yaaraan, Aashiqaan, etc.)

In essence, the word is just the perfect substitute of the Hindi Devo.n or Dev-Gan. But neither of those words capture the world of meanings Diwan encompasses. As a matter of fact, the Sanskrit Diwan actually means a head, leader, or chief. So, how do we get to all those connotations?

Well, Dev in Persian means a person of large stature. But more commonly, it has largely negative connotations, meaning a demon or a behemoth – which is evidently contrary to its conventional Sanskrit meaning but actually congruent with its original sense.

Just to digress, from the same etymological lineage we get Diwana. An amalgam of Dev (fiend) + Aana (Like), it means fiend-like or mad/lunatic, a well-known word often used to describe the ideal lover who has lost his sanity for the Beloved. This suffix Aana is the same as the Hindi ‘Saa’, coming across as Dev Saa, and clubbing with many other nouns like Aashiqana, Rindaana, Haryana, etc.

Moving on, as we touched upon above, the Persian-adopted Dev also means a big, prominent figure, so if you pluralize that, it becomes a bunch of important personalities that are assembled in one place. This place eventually came to be known as a Diwan, or a royal entourage of courtly men, simply put, a King’s court where his courtiers are present in His service.

That’s why we’ve grown an ear to phrases like Akbar’s fabled Diwan-e-Khas, A privy-council chamber, Diwan-e-Aam, a court for commoners, and Diwan-e-Aala, an upper court.

I know what you must be thinking at this point, “all that’s great to know, but Rajat, what has it got to do with Mother Poetry?”

To that, we’re just there!

Earlier, Diwan also used to mean a scroll (Daftar) that had the names of all these courtiers, this also included military men, so gradually, it was adopted into meaning a military pay-book, documenting the ingress and outgress concerned with different military leaders.

Now, turn your head back and look into the bygone lane of the past. Able to see something with a blurry lens?

You’re looking at military officials that were also great poets of the Persian language, starting from Rudaki, Auhadi, and Maghribi and all the way to Aseer, Shaukat, and even Bedil.

So, what happened over time, the notes of these military men also came to be known as Diwan, and now as we know, these weren’t any notes, these were poems that generations of people held close to their hearts.

Interestingly, a Diwan in its original sense was a collection of verses from different authors – more like an Intekhab (selection) – that biographers and connoisseurs collected select verses and compiled them in one place. Thus, it was only much later that Diwan emerged as a text of poetry associated with individual poets. As an effect, we see Diwan-e-Hafiz, Diwan-e-Bedil, Diwan-e-Ghalib, etc.

And that’s the story of how the word Diwan turned from a proper rational noun into an irrational one, defying all syntactic logic as we understand!

Also, if you chart the word’s course through the length of this blog, you’ll see that there is a literal shift from reason to non-reason as well, as Diwan includes men of reason, while Diwana is someone who has crossed into unreasonability!

Know any other words with this uncommon behavior? Drop them in the comment box below. 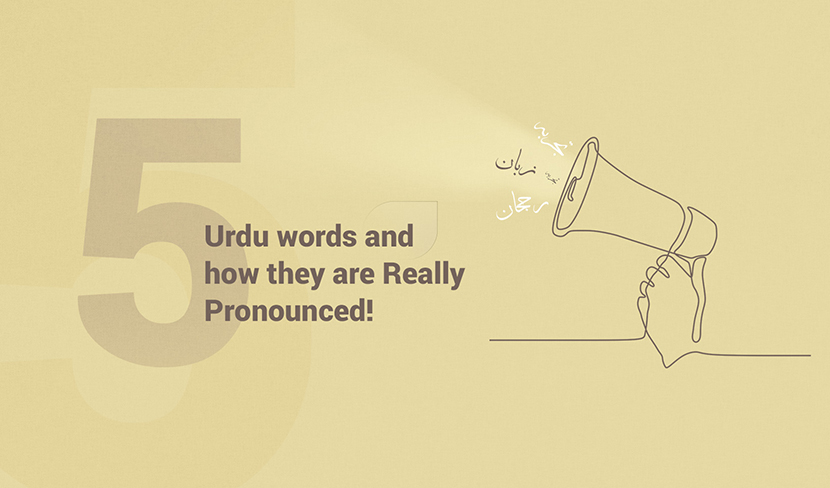 5 Urdu words and how they are Really Pronounced!

A word’s actual utterance getting vulgarized in our everyday speech, is just Uber-common. Let’s take the word pronunciation itself, how often do we hear it as Pro-noun-ci-ation? Grammar can be aesthetically pleasing.﻿ On that bold claim, I begin to take to one of Urdu grammar’s most charming facets, the Izafat. From ‘Tah-e-Dil se Shukriya’ to ‘Chashm-e-Bad-Door’, we come across the Izafat several times in our Roz-Marra. But how well do we understand it, and how often do we identify it? Are two questions that need to be objectively answered.